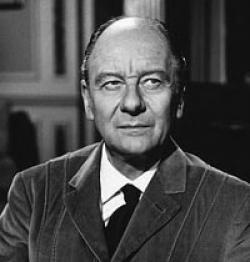 'Acting is half shame, half glo'... More

John Gielgud was one of the greatest Shakespearean actors and directors of the 20th century, who also shone in the fields of radio, television and cinema acting, if not perhaps quite so brightly.
Born in London on April 14 1904, Gielgud enjoyed a rather privileged upbringing, attending prep school then Westminster, where however his abilities won a scholarship. His mother was one of the Terry acting dynasty, and rather than university John opted to study at RADA, his genius for Shakespearean roles soon seen there.
Hamlet was Gielguds signature role  he gave more than 500 performances in six different productions, several of which he directed. He starred too in Macbeth, King Lear, The Tempest, The Winters Tale, Romeo and Juliet and many other Shakespeare plays. Chekhov was another of his dramatic homes: he appeared in The Three Sisters, The Seagull, Ivanov and The Cherry Orchard, his performances helping to define for a generation the English language staging of the pieces.
Though tragedy  in particular Hamlet  was his forte, Gielgud was also an excellent comic actor: Olivier thought Gielgud in The School for Scandal could not be bettered. Olivier, incidentally, was said to have worked to keep Gielgud out of the National Theatre during his time in charge there, out of resentment dating back to working under Gielgud as director years earlier.
Later in his career he explored new roles created by new writers such as Alan Bennett, Edward Bond, Harold Pinter (with whom he appeared on several occasions), and Edward Albee.
He acted in dozens of films, the first in 1924, but unlike Olivier he avoided the lure of stardom for many years, and had to wait until 1981 to win an Oscar in the film Arthur, playing a terribly British  and sharply sarcastic  butler. His choice of roles on TV and in the cinema later in life was criticized by some as lacking selectivity.
In 1953, just months after being knighted, he was prosecuted for cottaging, something for which it is said he had a penchant. Many public figures were ruined by such scandals, but Gielgud was warmly received by the British theatre-going public still  though he had to avoid America for several years. He was made a Companion of Honour in 1977, and given the Order of Merit in 1996. He died in Buckinghamshire aged 96 on May 21 2000.

Contributors: Do you have a site related to John Gielgud?
Supply some content for this page and we will gladly add a link to your site. Email here.