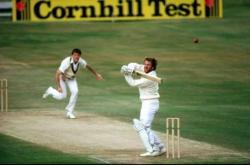 Born in Heswall, Merseyside
Born on 24th of November 1955

Sir Ian Terence Botham was born 24th November 1955. He is a former England Test cricketer and Test team captain, and current cricket commentator, also known by the nicknames "Beefy" and "Guy the Gorilla". Botham was born in Heswall, Wirral to Herbert and Violet Botham, both keen cricketers. He went to Milford Junior School in Yeovil, Somerset and played for the Somerset Under-15s. This is where his love affair with sport began and when he left secondary school at 15, he also had an offer to play football for Crystal Palace FC. He started his first-class cricket career in 1974 with Somerset County Cricket Club. He resigned in 1985 in protest against the sacking of his friends Viv Richards and Joel Garner. He then played for Worcestershire between 1986 and 1991. In 1992 he joined Durham, retiring midway through the 1993 season. Botham made his Test debut for England on 28th July 1977 in the Third Test against Australia. He went on to enjoy a Test career spanning 15 years and played in 102 matches. He is recognised as one of England's greatest Test players and was also England's captain for 12 Tests in 1980 and 1981. He is considered to have been one of the great all-rounders, especially at world-class level cricket. Botham is regarded as one of the greatest bowlers of the modern era, but his bowling pace became diminished due to back injury. However, he still retains the highest number of wickets taken by any England bowler. Despite the decline in his form, Botham retained his reputation of playing to extremes. In 1974, when playing for Somerset against Hampshire, a ball hit him straight in the mouth. He spat out teeth and simply carried on playing. He was renowned as a big-hitting batsman, but with a classical technique, and as a fast-medium paced swing bowler. Botham holds a number of Test records as an all-rounder, and the record for the highest number of Test wickets ever taken by an Englishman at 383. He scored a century and took 5 wickets in an innings in the same Test match on 5 occasions. No other player has managed this feat more than twice. The 1981 Ashes Tour was considered to be "Botham's Ashes" and he was named man of the series, scoring 399 runs and taking 34 wickets. Botham's One Day Internationals career included 116 games between 1976 to 1992. Something of a controversial figure, Botham was arrested in Australia when playing for the Queensland Bulls after assaulting a fellow passenger on an airline flight. His private life has also made tabloid headlines, with exposes of extra-marital affairs prompting a public apology to his wife Kathy. Botham has been a prominent fundraiser for charity undertaking a total of 11 long-distance charity walks, raising a total of more than £10 million for charity, chiefly for Leukaemia Research of which he was made President in 2003. He was voted BBC Sports Personality of the Year in 1981 and received a Lifetime Achievement Award in 2004. He was knighted by the Queen in 2007, and awarded honorary degrees by the University of Bath and by Leeds Metropolitan University in 2008.


Glenn writes "Ian 'Beefy' Botham is a famous and now retired English Test cricketer. Well known for his colourful exploits both on and off the pitch, Botham was born in Heswall, England. He attended Milford Junior School in Yeovil, Somerset, where his life-long passion for sport began. Subsequently he was at Buckler's Mead Comprehensive School but left aged only 15 determined to pursue a career in sport. This was despite some errant advice from his careers master at school who reputedly said; "Fine, everyone wants to play sport, but what are you really going to do?"

Botham played for Somerset Under-15s. He had an offer to play football with Crystal Palace F.C. but chose cricket as he wanted to play the Somerset county team. He later played for both Yeovil Town and Scunthorpe United football clubs.

It was in cricket, however that Botham cemented his international reputation. Botham's Test debut for England came on the 28 July 1977 in the Third Test against Australia. His Test career lasted 15 years and 102 matches.

He played for Durham, Somerset and Worcestershire, as well as a season (1986-87) in Australia playing for Queensland. In first-class cricket, he scored 19,399 runs at 33.97, took 1,172 wickets at 27.22 and held 354 catches. Botham's averages might not look much but Botham was an all-rounder, which is unusual at world-class level.

Always known as a tough man, he famously was hit in the face by a 'bouncer' in 1974 when playing for Somerset against Hampshire and facing the West-Indian fast bowler Andy Roberts. He simply spat out some teeth and carried on playing!

Botham has always been very outspoken and never far from controversy. He received a short-term suspension for smoking cannabis in 1986. Botham has undertaken a total of 11 long-distance charity walks. He is credited with having raised more than ten million pounds for various charitable causes. He married (Kathy) Kathryn Waller in 1976 and was knighted in 2007 in recognition of both his sporting and charitable achievements."

From Mark Andrew Battle of Britain Historical Society on 24th November 2009
I had great pleasure in being a fellow guest with him at RAF Leeming Yorkshire Officers Mess for The Battle of Britain Memorial Dinner. Sadly I did not receive a copy of the photograph and the group included BOB Veteran Ben Bennions

Contributors: Do you have a site related to Ian Botham?
Supply some content for this page and we will gladly add a link to your site. Email here.