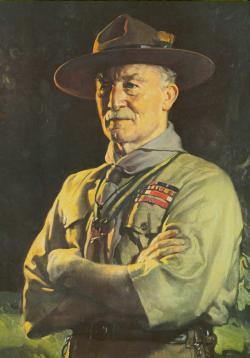 Baden-Powell today is remembered as the creator in 1908 of the scouting movement, he was also in his day a national hero as the man who with undoubted creativity and energy led the defence of Mafeking during its 217 day siege by Boer forces. Other (disputed) aspects of his military career are less well-known and if true totally reprehensible, including allegations he allowed forces under his command in Africa to massacre prisoners. The Scout Movement was inspired by boys who helped his men in Mafeking, a fact mentioned in Scouting for Boys, published in 1908. With his sister he founded the Guides in 1910. Powell married a much younger woman when he was 55. He died in Kenya.

Contributors: Do you have a site related to Robert Baden-Powell?
Supply some content for this page and we will gladly add a link to your site. Email here.