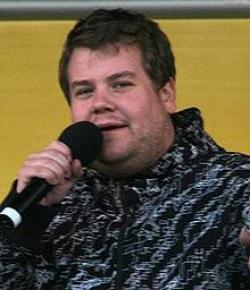 James Corden was a jobbing actor, albeit a busy one, until he grabbed stardom by co-writing cult comedy Gavin and Stacey with Ruth Jones.
Born in High Wycombe in 1978, and educated there and in Great Missenden, Cordens first brush with fame was in Tango ads; he then got a role in the musical Martin Guerre; was in Twenty-Four Seven with Bob Hoskins; and gained more exposure by landing a major part in ITV drama Fat Friends in 2000, the same year in which he appeared in Teachers. His work in Alan Bennetts The History Boys, in which he played Timms both in the theatre and in the film version, nudged him closer to the big-time, giving him the opportunity to appear on stage in Broadway as well as London.
Legend has it that the idea for Gavin and Stacey came to him while he was attending a wedding: intended as a one-off play it was commissioned by the BBC for a full series, and thus far has run to three plus a Christmas special.
Lesbian Vampire Killers and his sketch show with Mathew Horne were less successful to say the least, but his humour and personality have been put to better use in other fields, notably presenting Sport Relief in 2010. Not afraid to break a few taboos his Sport Relief sketch with David Beckham was unforgettable; and his comments in 2008 on Hollyoaks (in which he appeared in 2002) and its actors endeared him to millions.

Contributors: Do you have a site related to James Corden?
Supply some content for this page and we will gladly add a link to your site. Email here.