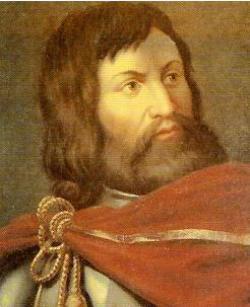 Simon de Montfort can be seen either as an early champion of (limited) democracy with his attempts to reform the power of the monarchy and delegate government to elected councillors, or as merely ambitious for power, depending on ones reading of history.

Born in 1208 at Montfort, Île de France, Simon de Montfort grew up in France but on coming of age renounced his claims on his family lands in return for hereditary rights to the English earldom of Leicester . He arrived in England in 1229 and with the help of his cousin, the Earl of Chester , made good progress in establishing his claim and being accepted by Henry III . It was not until April 1239, however, that he was formally accepted as Earl of Leicester. His tenure was short lived: his proposed marriage to Eleanor, the Kings sister, broke her vow of chastity and provoked a revolt among other English nobles who turned Henry III against his new brother-in-law, driving him from England.

Simon regained his honour by going on crusades in 1240 -1242. His return to England now possible, Simon joined Henrys invasion of France in 1242. Unfortunately the expedition ended in disaster, though Simon helped Henry evade capture. Reconciliation with Henry was brief; the latter was to turn on Simon yet again over Gascony, then a rebellious English province. These reversals finally led Simon to conclude the king was unfit to rule. He led a group of barons in demanding reforms that limited the monarchy and redistributed political power more equably. When Henry refused to abide by these provisions Simon led a rebellion and managed to capture the king at the Battle of Lewes in May 1264. He called the first English Parliament on January 20 1265 but then governed England as a military dictator until he was killed by Prince Edward at the Battle of Evesham on August 4, 1265.

Contributors: Do you have a site related to Simon de Montfort?
Supply some content for this page and we will gladly add a link to your site. Email here.