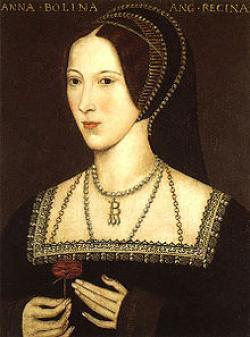 The life of Anne Boleyn was a tragically short one, though there is a certain irony in this lady in waiting to Catherine of Aragon being legally disposed of to make way for Jane Seymour, one of Annes own ladies in waiting.
Annes birthplace is not clear (Blickling Hall in Norfolk being one contender for the honour), and neither is her date of birth, with suggestions varying between 1501 and 1507. Her father Thomas Boleyn had married Elizabeth Howard, the Duke of Norfolks daughter, so she was well connected, and Anne was at the French court from 1519 to 1521. Her culture and sophistication as well as her beauty were seemingly the reasons Henry VIII was attracted to her, though famously she was also one of the few women to refuse his advances for some time, increasing the forbidden fruit aspect of their relationship.
But Anne did give in, and when they secretly married in January 1533 she was already pregnant. Pregnant with a daughter, however, not the son Henry craved. His interest waned from Princess Elizabeths birth on September 7 1533, and a miscarriage in September the following year probably sealed her fate. Though Anne had been crowned at Westminster with great pomp in the summer following her marriage after Cranmer unsurprisingly found her to be Henrys legal wife, the King probably had some misgivings about the legality of their marriage, as he had previously with that to Catherine.
When Henry became enamoured of Jane Seymour, it was quickly arranged that trumped up charges of adultery with four commoners and incest with her brother Lord Rochford be brought. The case was rapidly proved with confessions extracted under torture, and Annes show trial in a court headed by her uncle the Duke of Norfolk was brief. She was executed on Tower Green on May 19 1536, Henry at least granting her the noble end of beheading by sword rather than the customary axe.

Contributors: Do you have a site related to Anne Boleyn?
Supply some content for this page and we will gladly add a link to your site. Email here.