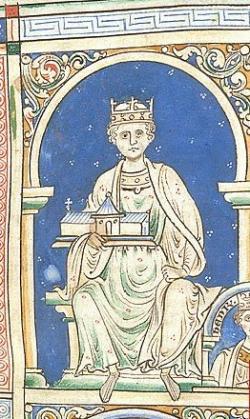 Henry II was born on the 6th March 1133 in Le Mans in France, his father was Geoffrey of Anjou, and his mother Empress Matilda was the daughter of Henry I. He spent his childhood in France and received the title of Duke of Normandy in 1150, and eventually moved to England when he was nine years of age. He became ruler of Anjou when his father died in 1152. He married Eleanor Of Aquitaine which increased his power and wealth on 18th May in 1152. They did not enjoy a happy marriage troubled times came to a head when he placed Eleanor under house arrest for fifteen years.

His mother had tried unsuccessfully to claim her right against the English Throne with an invasion in 1147 against King Stephen, she failed, and finally gave up her quest against Stephen. However Henry realised the importance and wished to carry on, he didn't give up, with huge support, he tried once again and travelled to England in 1153 with a fleet of ships. Stephen agreed that Henry should become heir to the throne, this was confirmed in the treaty of Wallingford which was witnessed by the Knights Templar. Stephen died on 25th October 1154, and Henry was finally crowned at Westminster Abbey on the 19th December 1154, and ruled as King Henry II.

He had appointed Thomas a Beckett as Chancellor, they became good and firm friends, Henry also chose Thomas to become Archbishop Of Canterbury, although this was not a popular choice, however, Henry's attempts to reform the Courts, that historically had been controlled by the Church resulted in conflict between the two friends. Their dispute came to a head when Henry accused Thomas of treason, Thomas fled to France, although he did return shortly afterwards. Four of Henry's Knights had overheard him angrily state that he wanted rid of Thomas a Beckett, they travelled to England, and, on finding him, brutally murdered him whilst he was inside Canterbury Cathedral in 1170.

His interest in the Law led to him re-organising the Judicial System, and the introduction of the Magistrates Courts. Henry died on the 6th July 1189, aged 56 years, and was later buried at Fontevrault Abbey France. His two sons succeeded him first Richard who would be known as Richard The Lion Heart, and later King John.

Contributors: Do you have a site related to Henry II?
Supply some content for this page and we will gladly add a link to your site. Email here.