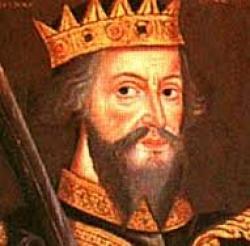 William I or ( William The Conqueror), was born in Falaise, Normandy in France, the only son, albeit illegitimate son of Robert, Duke of Normandy. William succeeded his father on his death, at his father's behest when he was just a child in 1035, his early life was difficult and consisted of his three closest advisors being murdered, eventually King Henry I of France took him under his wing and gave him protection. William married Matilda of Flanders in 1053 at the magnificent Cathedral of Notre Dame in France, their alliance produced four sons, and six daughters.

William found it necessary to invade England to claim the throne, as when Edward the Confessor died without an heir, there were three claimants who intended the throne for themselves. William organised a Council of War at Lillibonne, the army swelled it's numbers in Normandy, Harold amassed his Army on the South Coast of England and guarded from the impending attack. Harold also had to defend against another attack from Harald of Norway who landed near York, and after a bloody battle at Stamford Bridge Harold and his Army defeated them.

William finally landed in Pevensey in Sussex on the 28th September 1066, shortly after he marched his army to Hastings and like a lion waiting for it's prey held his position, Victory sped Harold southwards to meet William, and the bloody Battle of Hastings ensued, this famous battle is depicted in the Bayeaux Tapestry. Harold met his painful death when an arrow pierced him through the eye and ended his reign. William marched in victory on his way to London, however the conquest of the South was not to repeat itself with the problems of the north so easily, and more fighting followed. William was crowned on Christmas Day at Westminster Abbey in 1066.

William changed the very essence of every day living in the middle Ages, he changed laws and policies, his legacy is still seen everywhere today with stunning architecture, churches, cathedrals and even the Tower Of London. He commissioned the recording of all lands and people to great detail for tax purposes in 1086, with The Domesday Book, which still survives today, and without the use of computers the detail diligently reported is a magnificent feat of it's time. William died in Rouen in France at the age of 59 after a fall from his horse, which resulted in his demise, he named his successor as his son William Rufus before he was buried in St Stephen's Abbey, Caen Normandy.

Contributors: Do you have a site related to William the Conqueror?
Supply some content for this page and we will gladly add a link to your site. Email here.