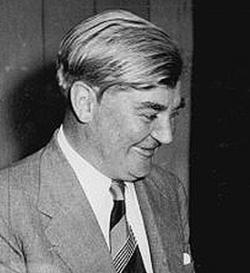 'We know what happens to people'... More

The architect of the National Health System Aneurin Nye Bevan was born on November 15, 1897 in Tredegar, Wales. Coming from a working class mining family he experienced first-hand the deprivations of poverty and ill health.

Bevans working life began aged 13 and his commitment to workers rights began equally early leading to his election as a union organizer aged 19. The same year, 1916, Bevan won a scholarship to study in London where his reading of Marx further influenced and deepened his socialist ideas. Blacklisted as a revolutionary he was unable to find mining work but was paid as a union organizer and in 1926 helped organize the South Wales Miners during the General Strike. He was elected as MP for Ebbw Vale in 1929 and in 1934 married fellow MP, Jennie Lee.

During the war Bevan was vocal in advocating support for Stalin in the fight against Nazism. With the landslide Labour victory of 1945 Bevan was appointed Minister of Health and could begin his great work establishing what was to be the National Health Service. In 1948 his plan for nationalizing hospitals and providing a free medical service was implemented, driven through in spite of initially dogged resistance from the medical profession, Bevan's charm, political nous and total determination overcoming all obstacles in his great task.

Bevan became Minister of Labour in 1951 but was to resign shortly afterwards in protest at the introduction of prescription charges for dental care and spectacles, diluting his vision of health care in Britain. His uncompromising stance defined the left wing of the Labour party and in 1955 he was a strong candidate for party leader. With Hugh Gaitskells victory Nye Bevan became shadow foreign secretary and in 1959 was appointed deputy leader. At this time he was terminally ill and died shortly afterwards on July 6 1960.

Contributors: Do you have a site related to Aneurin Bevan?
Supply some content for this page and we will gladly add a link to your site. Email here.