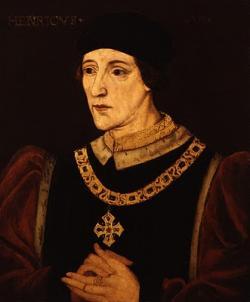 Henry VI was born into the House of Lancaster on the 6th December 1421 at Windsor Castle in Berkshire, his mother was Catherine of Valois and his father was King Henry V. He was the only heir at the time of his father's death when he was just eight months old, due to his tender years he was appointed protectors, and England was ruled by a Regency Government. He was crowned at Westminster Abbey on 6th November 1429 King Of England, although he did not take the mantle of responsibility until he became of age in 1437, also after the death of his grandfather he was crowned King Of France in 1431 in Notre Dame, Paris.

Henry had grown up a gentle spirit with a thirst for knowledge, he founded Eton College and also Kings College in Cambridge. He married Margaret of Anjou in 1445, and although she was young she was a strong character, Henry never the less struggled to rule over both England and France, a struggle which was heightened by the powerful successes of The Dauphin recently crowned, and Joan Of Arc, military successes and diplomatic failings eventually led to the collapse of his control over his French lands.

At home was no better with Civil War erupting between the two powerful houses of The Yorkist's, and The Lancastrians, which would be remembered throughout time as the Wars Of The Roses. Henry had suffered a mental breakdown at which time Richard, Duke Of York took over the reigns, bloody battles ensued and when the Duke Of York was killed his son continued and led the fight, he beat the Lancastrians at Mortimer's Cross, he then crowned himself as King Edward.

Henry decided to go into exile, eventually returning only to be captured, however, duplicity and intrigue ensured that Henry was re-instated to his rightful position, Edward fought on, hungry for the crown, blood was spilled and the House Of Lancaster was beaten at the Battle of Tewkesbury in 1471. Henry was murdered whilst incarcerated in the Tower Of London in 1471, he was aged 49, he was buried at Chertsey Abbey, however, he was later moved to Windsor Castle, he was the last of the Lancastrian Monarchs to reign, he was succeeded by Edward IV, son of Richard, the Duke Of York.

Contributors: Do you have a site related to Henry VI?
Supply some content for this page and we will gladly add a link to your site. Email here.