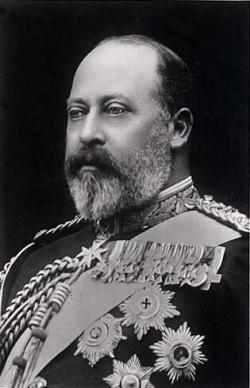 Edward VII was born on the 9th November 1841 in London, eldest son of Queen Victoria, and Prince Albert. Known throghout most of his life by family and friends as Bertie. He was well educated at Edinburgh, Oxford and Cambridge Universities, and led an interesting social life with a passion for gambling, shooting, racing, and he was notorious as having had numerous mistresses. He married Princess Alexandra of Denmark when he was 22 years of age in 1863, together they had six children, three sons, Albert, George, and Alexander, and three daughters Victoria, Maud, and Louise.

He was heir apparent for nearly sixty years, and, on the death of Queen Victoria on the 21st January 1901, he was destined to become King of Great Britain, Ireland, and Emperor of India, he was crowned in August 1902 at Westminster Abbey in London.

On the death of Prince Albert, Queen Victoria blamed Edward for the worry caused and retreated from public life, adopting a sombre lifestyle of strict mourning. Albert was encouraged to appear on his mothers behalf at public engagements. His love of travel and languages stood him in good stead he spoke French, German, Spanish and Italian. He toured the Middle East, India, and even stayed at the White House in Washington. For the first time in a very long time public duties were performed with much ceremony, He re-instated the opening of Parliament which had not occurred since the death of his father.

He made several innovative changes and had a huge impact on improving international links, due to his love of foreign policy. He was also patron of Arts and Sciences, in fact his direct involvement in foreign affairs proved invaluable with the Britain, France and Russian alliance. He was a reformist, encouraging changes in both the military and navy.

After just a short reign which was both popular and useful Edward, who was the first Monarch of the twentieth Century suffered several heart attacks, he died on the 6th May 1910 at Buckingham Palace in London, he was finally laid to rest in St Georges Chapel in Windsor on the 20th May 1910, the funeral was attended by many crowned heads of Europe.

Contributors: Do you have a site related to Edward VII?
Supply some content for this page and we will gladly add a link to your site. Email here.