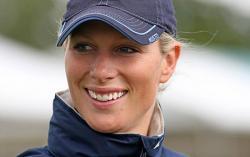 The daughter of HRH The Princess Anne, Princess Royal, granddaughter of HRH Queen Elizabeth II was born in the private wing of a Paddington Hospital. Her father was Captain Mark Phillips, an Olympic Gold medal winning equestrian rider. Given her lineage, it was unlikely that horses would not figure somewhere in Zara Phillips' life.

Zara Phillips qualified from the University of Exeter, specialising in Equine Physiotherapy. In 2003 she was given sponsorship by Cantor Index, a betting firm, to pursue her equestrian career. She was disappointed not to be able to compete in the 2004 Athens Olympics when her horse Toytown suffered an injury in the lead up to the Games. She competed in the 2005 European Eventing Championship, taking both individual and team gold. She achieved individual gold and team silver in the FEI World Equestrian Games of 2006 and team gold in the 2007 European Eventing championships. In 2007 fans witnessed Philips come crashing off her horse Tsunami II and land horrifically on her neck. Stewards rushed over, fearing the worst, but miraculously Zara Phillips was not seriously hurt.

There were high hopes for Phillips at the Beijing Olympics of 2008 but she was once again forced to withdraw due to a similar injury to her horse Toytown.

Zara Phillips undertakes a number of royal engagements, including many charity events, as part of her commitments as a member of the Royal Family. Zara is twelfth in the line of succession to the British throne. As such she is the subject of some unwanted attention from the paparazzi, particularly during her stormy relationship with National Hunt Jockey Richard Johnson Phillips was also reported dating Mike Tindall, a England rugby star. Tindall played in the 2003 World Cup winning Rugby Union team and also plays for top Guinness Premier League side Gloucester

Contributors: Do you have a site related to Zara Phillips?
Supply some content for this page and we will gladly add a link to your site. Email here.