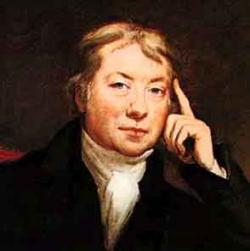 The discovery of vaccination by Edward Jenner has arguably been responsible for saving more lives than any other medical advance in history. Thanks to Jenner the scourge of smallpox has been eradicated, samples of the disease now carefully stored in secure laboratories for research purposes only.

Edward Jenner was born on May 17, 1749 in the village of Berkeley in Gloucestershire. Aged 13 he began his medical career as a surgeons apprentice near Bristol and in 1770 went to London where he studied under the eminent surgeon and naturalist John Hunter before returning to Berkeley in 1773. Here Jenner continued to contribute to Hunters studies of natural phenomena while practicing the methods of precise observation and recording he had learned in London. This was to prove invaluable in his attempts to find a cure for smallpox.

Jenner was aware of the ancient practice of inoculation against smallpox carried out in the East and recently introduced into England. It was highly risky as it used a small dose of the smallpox virus which could prove fatal. Jenner, however, had heard from local farmers that milkmaids were immune to smallpox because they had caught cowpox, a relatively harmless disease. Jenner studied this phenomenon for several years until he was convinced there was a link. His next step would be considered totally unethical today. On May 14, 1796 Jenner vaccinated a young boy with cowpox taken from the pustule of a milkmaid infected with the disease, and shortly thereafter infected him with smallpox! The boy did not die or indeed suffer from smallpox. In 1798 Jenner published the results of his experiments and in 1800 they received official recognition from the British government. Jenner spent the rest of his life working on establishing the principle of vaccination which was first adopted in Europe and more gradually in his own country. Edward Jenner died on January 6, 1823.

Contributors: Do you have a site related to Edward Jenner?
Supply some content for this page and we will gladly add a link to your site. Email here.