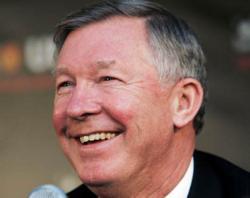 Sir Alex Ferguson was a Scottish professional footballer and is currently managing the highly successful English Premier League side Manchester United. Ferguson has been in charge at Manchester United for more than 22 years. This is a a remarkable length of time for a manager at such a high level in English Football. Ferguson's longevity is even more special given that Manchester United probably the world's most famous and best supported football club.

Ferguson was born in Govan, a district of Glasgow. He was already playing part time for Queens Park and then St Johnstone as he worked as an apprentice tool-worker in the local shipyards. Despite scoring regularly, he was out of favour at St Johnstone and found it hard to maintain a first team place. Poor form by the St Johnstone team led to his selection for a game against Rangers where he scored a hat trick, giving his team a surprise victory.

Dunfermline subsequently signed Ferguson in 1964 as a full time professional. In the 1965-66 season he was joint top scorer in the Scottish League with Joe McBride of Celtic.
He moved to Rangers in 1967 but had a fairly unhappy spell, often out of favour with the club. He was blamed for a goal conceded in the loss at the 1969 cup final and his playing career never really recovered at Rangers. He also played for Falkirk, where he was also player-coach for a time, and then Ayr United before retiring from playing in 1974.

Furguson's managerial career is the most successful of any British professional football manager. He began at East Stirlingshire where his brief spell led to improved results but he very soon moved on to the larger club St Mirren. He took St Mirren from the lower half of the Scottish Second Division on into to the second tier of Scottish Football, where they secured the First Division championship, all in just three seasons.

He moved, amidst some controversy, to Aberdeen. Ferguson took some time to establish himself there before he went on to achieve eight major titles including the UEFA Cup in as many years.

Then, in 1986, he moved south of the border to Manchester United to succeed Ron Atkinson. He has amassed 20 major titles, including 10 Premier League Championships and two UEFA Champions League titles. The Manchester United board has shown great faith in Ferguson when there have been the rare lean spells. Their judgement has proved sound and Ferguson has always repaid their patience with yet more top class football glory.

Contributors: Do you have a site related to Alex Ferguson?
Supply some content for this page and we will gladly add a link to your site. Email here.