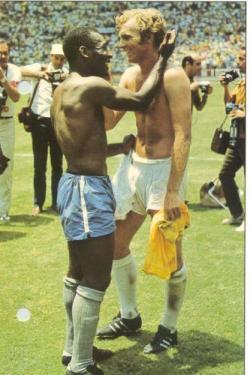 Essex born Bobby Moore was captain of the England football team which defeated Germany 4-2 to win the World Cup at Wembley in 1966. Moore held aloft the Jules Rimet trophy on June 30, 1966 to mark the English victory, but only after gallantly wiping the mud and sweat from his hands before shaking the Queen's hand.

He won a total of 108 caps for the England team, a national record at the time of his international retirement in 1973. 90 of those appearances for England were as captain. Moore captained West Ham United for more than ten years after joining them as a youth player in 1956. His debut in the first team came on the September 8, 1958 against Manchester United. Moore had also played cricket for the Essex youth team. Another member of that famous World Cup team played cricket alongside him there, no less than the scorer of the winning goals in that legendary final - Geoff Hurst!

Bobby Moore was credited as being a thinking man's player. His ability to read the game, organise and motivate his players were what made him such a great captain. He was awarded the coveted BBC Sports Personality of the Year title at the end of 1966, becoming the first footballer to receive the award. He was also awarded an OBE in the New Year Honours List.

Moore became a national hero and a sporting icon after the World Cup victory. Although he captained England again in the 1970 World Cup, the glory days of 1966 never returned.

Moore recorded a new West Ham appearances record in 1973 when he played for the club for the 509th time. This came just three days after he won his 100th cap for England when they thrashed Scotland 5-0 at Hampden Park.

Bobby Moore died of bowel cancer on February 24, 1993 at the age of only 51. It was a sad day for West Ham and English football. The gentleman of the game had been lost.

Contributors: Do you have a site related to Bobby Moore?
Supply some content for this page and we will gladly add a link to your site. Email here.