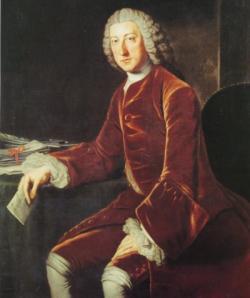 William Pitt the Elder, known as The Great Commoner, guided Britain to victory during the Seven Years War. A great orator, statesman and patriot he was fearless in pursuit of his convictions.

Born in Westminster on November15, 1708, William Pitt was educated at Eton and at Oxford which he had to leave due to an attack of gout  to prove a lifelong affliction. In 1735 he entered Parliament and immediately took on the Prime Minister Sir Robert Walpole over his war policy. This lost him the favour of George II and also temporarily the chance of high office. He was, however, made Paymaster General in 1746.

Pitts true political ambitions remained unfulfilled until 1755 when he joined the cabinet. His eloquent opposition to the conduct of the war with France, though, soon led to his dismissal. Undeterred he rallied popular support for increasing the size and strength of military resources: "I know that I can save this country and that no one else can," he said with sincerity. In December 1756 he was made Secretary of State and in 1757 joined forces with Lord Newcastle whom he helped to win the exceptionally successful Seven Years War. However his calls to extend the war against Spain were rebuffed and Pitt resigned in 1761, spending most of the remainder of his political career in opposition.

George III made him Earl of Chatham and First Lord of the Treasury in 1766 but ill health caused him to resign in 1768. Although he returned to politics the following year his arrogance and aloofness gained him few friends and reduced his effectiveness as a politician. The American War of Independence caused him to return to politics where he campaigned vigorously if fruitlessly to keep the colonies for Britain. It was while addressing Parliament on this subject that he fell ill. He died a month later on May 11 1787, and was buried at Westminster Abbey.

Contributors: Do you have a site related to William Pitt (The Elder)?
Supply some content for this page and we will gladly add a link to your site. Email here.