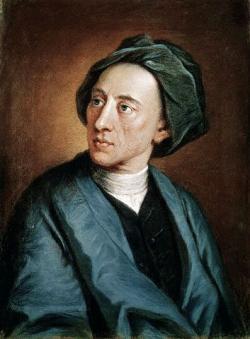 The greatest English poet of his age, Pope moves elegantly from verses of biting satire to the classically beautiful, a poetic technician of brilliance, though his often bitter tone and haste to attack critics and others makes him a less than lovable figure. He has a mastery of metre  the breathless rush woven into The Power of Ridicule is a good example  and the simplicity of the couplets in which he wrote endows his work with great clarity.
Pope was born on May 21 1688 in London, his father a linen merchant and Catholic convert. His formal education was lacking, though he briefly attended several schools, two of them in London Catholic establishments, though officially Catholics were barred from teaching. The same religious laws forced the family out of London to Binfield near Windsor where they had a small estate, and made it impossible for Pope to go to university. This exclusion was echoed in later years politically, where as a Tory in a Whig period he was again an outsider.
With poor health from the age of three Pope largely studied at home, poring over books in his fathers library. An attack of tuberculosis damaged his spine and stunted his growth when he was 12, leaving him with a spinal curvature and just 4 foot 6 inches tall.
Early success came with An Essay on Criticism (1711), a poem concerned with art and poetry and the divide between natural and classical. This was succeeded by The Rape of the Lock, a satirical and droll piece that he published in 1712 then revised and added to later. Unusually for the age Pope was able to become financially independent via his writing  his deal to translate Homers Iliad provided him with a significant income of £200 a year for six years (1715  1720), and his version of The Odyssey in 1726 was also lucrative, though both were more re-imaginings than translations.
Popes earnings allowed him to design and have built his own Palladian villa in Twickenham, where he created the famous grotto still in existence. He was on friendly terms with many of the greatest literary figures of his day, among them Swift, Gay and Addison. The last years of his life were largely devoted to editing (sometimes drastically) his correspondence for the benefit of posterity. He died in Twickenham on May 30 1744.

Contributors: Do you have a site related to Alexander Pope?
Supply some content for this page and we will gladly add a link to your site. Email here.