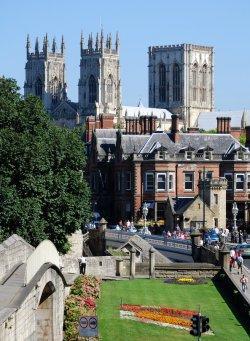 There are few cities in Britain that have the magical beauty of York . Where visitors can enjoy outstanding archaeology and a history that dates back nearly 2,000 years combined with bustling shopping streets and numerous award-winning attractions.
The city itself protected by the historic city walls is a web of ancient timbered houses and narrow winding streets just waiting to be explored. The whole city exudes an atmosphere of history with the numerous historic attractions representing the many ages that York has weathered.
The Jörvik Viking Centre is an exciting concept where visitors are whisked back 1,000 years to a reconstructed Viking village complete with authentic sounds and smells of the time.
The National Railway Museum tells the continuing story of British railways up to the present day and is the largest museum of its kind in Europe.
The world-famous Castle Museum has an array of fascinating shops in cobbled streets for you to explore.
The Yorkshire Museum which is set in ten acres of botanical gardens displays some of the finest Roman, Anglo-Saxon, Viking and Medieval treasures discovered in Britain.
York Minster , the pride of the city is one of the largest Gothic cathedrals north of the Alps and is a joy to anyone who visits.
The Merchant Adventurers' Hall , built in the 1350s, is one of the finest Medieval guild halls surviving in Europe. It was here that merchants transacted business and held feasts, as their successors still do today.
Fairfax House , a classical masterpiece of its age is without doubt one of the finest town houses in England, obtaining one of the best collections of mid-18th century English furniture and clocks.
Eating out is a delight in York. Its numerous restaurants range from contemporary English cuisine; roast beef and Yorkshire Pudding ; Italian; French; Mexican; Chinese specialties and even Creole!