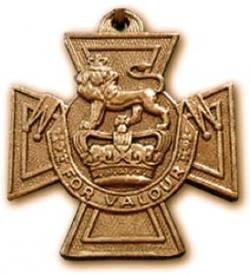 Although the Victoria Cross was not actually instituted until January 29 1856 , its conditions allowed for the award being given to those who had previously fulfilled the criteria of conspicuous bravery, self-sacrifice or some particularly valorous act during the then ongoing Crimean War. Thus it was that the man regarded as the first recipient of the VC was Charles Lucas, for his incredible coolness and bravery on June 21 1854  though Commander Henry Raby was the first to have the award presented to him on June 26 1857, the first award ceremony when Queen Victoria gave out 62 of the medals.
Lucas was a 20-year-old mate (a rank which was superseded by that of Sub-Lieutenant a few years later) aboard the warship HMS Hecla, engaged in the bombardment of the Russian fortress at Bomarsund on the Alund Islands in the Baltic. The Russian and Finnish troops there returned fire, and one of their artillery pieces managed to hit the Hecla with a fused shell which landed on the upper deck. As his comrades threw themselves down Armagh -born Lucas ran and grabbed the shell, raced to the side and threw it towards the water. It exploded before hitting the sea, but nobody was injured in the blast which might otherwise have at the very least killed many of the sailors, and possibly sunk the ship.
Immediately promoted by the Captain of the Hecla to Lieutenant, Lucas went on to marry that Captains daughter, and rose to the rank of Rear-Admiral, dying aged 80 three days after Britain declared war on Germany in 1914 . His VC can be seen at the National Maritime Museum in Greenwich.