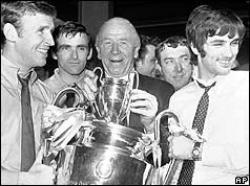 As L.P. Hartley might have said, the past is a foreign country but they didn't have foreign football players then. The previous year Celtic lifted the European Cup with a totally home-grown side; Benfica, Manchester Uniteds opponents at Wembley in 1968 fielded a 100 per cent Portuguese team; Uniteds 11 were all British or Irish.
The occasion was dramatic but poignant too: many looked on and saw the ghosts of those Busby Babes killed in the 1958 Munich air crash , several of them young enough, as were Bobby Charlton and Bill Foulkes, to have still been in the side had they lived.
Man Utd took the lead with a looping header by Charlton, Benfica equalising through Graça to take the game beyond regulation time. In the extra half-hour Uniteds fitness proved vital on a hot night. Three minutes into extra time George Best scored after a lightning dribble; Brian Kidd, on his 19th birthday, netted a minute later to kill the game; Charlton applied the coup de grace shortly afterwards.
Today top teams are packed with proven internationals: it is enlightening to see four English players in Uniteds side  Alex Stepney, Foulkes, David Sadler and Brian Kidd - shared just eight caps between them; and man of the match John Aston never received one. Teamwork and the nous of manager Matt Busby helped secure victory: Best and Charlton added style; but equally important was Nobby Stiles , nullifying Eusebio in 1968 as he had in the 1966 World Cup semi-final.