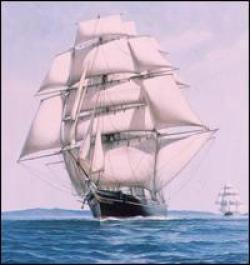 Shortly before 5am on May 21 2007 a fire took hold of the historic clipper ship Cutty Sark in Greenwich. The ship was undergoing extensive restoration work for the third time in her history. At the time arson was suspected, but subsequent investigations indicated the most an electrical fault in an industrial vacuum cleaner probably started the flames.
During the two hour blaze damage done to the ship was substantial, though happily much original woodwork including the masts had been removed for conservation work, and her famous figurehead was on display elsewhere. The cost of restoring the ship rose from the previous estimate of £25 million to over £30 million, and there was some debate about the project: was this now the Cutty Sark  is my grandfathers axe still the one he bought after two new handles and three heads? Is it right to spend such sums on preservation rather than creation?
The romantic aura of Cutty Sark meant that money both private and from the Heritage Lottery Fund was raised to complete the restoration. So the ship built in Dumbarton in 1869 and named for a character in a Robert Burns poem, which 10 years out of 10 won the wool race to London from Australia, and only lost in her most famous tea race from Shanghai because of a broken rudder, remains as a major tourist attraction, her lines designed for speed still giving the ship an enduring beauty.