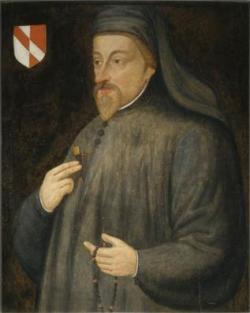 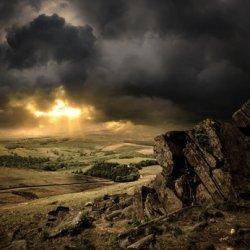 Geoffrey Chaucer is one of the greatest figures in English literature, and hugely significant in the history of English. Though he was prolific, and stylistically Troilus and Cressida may be his most successful creation, he is remembered above all for one work: The Canterbury Tales. As that was written in several parts separated by years, however, and was probably not complete when he died in 1400, it should perhaps be regarded as several works.
Geoffrey Chaucer was a court poet for Richard II and briefly for Henry IV , but his life was an eventful one that several times took him overseas on the kings service, and when the political wind changed  he was closely associated with John of Gaunt - saw him out of royal favour and impoverished for several years. In good odour again he is supposed to have eventually read parts of The Canterbury Tales at Richard IIs court in London on April 17 1397 for the amusement of those gathered there.
That his stories were written in Middle English did not deal a death blow to the use of Norman French at court (it is still employed officially even now on occasions such as the royal assent to bills), or the use of Latin by scholars, but it did strengthen our native language in that the popular tales soon spread the use and comprehension of the southern dialect of English in other parts of the country, helping make it a more national phenomenon.