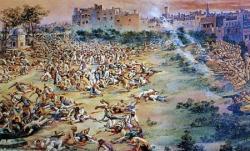 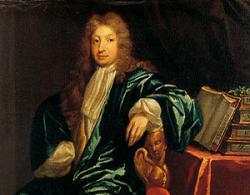 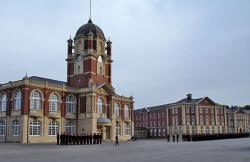 On April 13 1919 one of the most shameful acts in the history of the British Empire was perpetrated at the command of Brigadier-General Reginald Dyer: Sandhurst Graduate; Companion of the Bath; and mass murderer.
After WWI the British in India were desperate to retain the jewel in the crown in the face of political pressure from the Indians themselves, a depressed local economy, and a world picture where Bolshevism loomed large. Increasingly draconian measures were taken by the authorities to control the independence movement, including the Rowlatt Act allowing them to detain suspects without trial, carry out trials in camera, and gag the press.
On April 10 a small protest in the Punjab city of Amritsar had ended in bloodshed; retaliatory attacks on symbols of empire like banks followed before order was restored. Then on April 13 a crowd of 10000 or more gathered at a large walled garden in the city, largely out-of-towners there to celebrate a harvest festival. Dyer took a force of 80 soldiers to the garden, and ordered them to fire on the crowd. They continued firing for 10 minutes until ammunition was running out.
According to the British 379 died; Indian sources claim the figure was nearer 1000. Many died overnight of treatable wounds as Dyer enforced a curfew.
Eventually government suppression of the news failed. The massacre was investigated, and it was found Dyer had quite deliberately set out to slaughter Indians as a political move. He was punished by being asked to resign his commission.