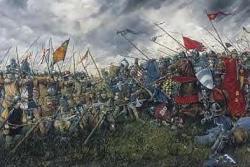 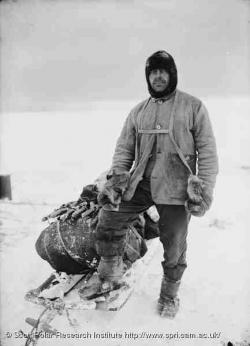 Some sources refer understandably to The Battle of Falkirk  a 20 minute action - as a military embarrassment.
Having reached Derby then retreated to Scotland, Charles Edward Stuart, the Young Pretender, laid siege to Stirling . Cumberlands Hanoverian army occupied Edinburgh , sending a force of perhaps 7,000 under General Hawley to relieve the siege. The Jacobite army had no tents to allow a field campaign, so moved to attack Hawleys camp near Falkirk Moor.
The ensuing battle for obvious reasons does not feature among the honours of any British regiments. Hawley refused to believe the enemy was advancing, failing to dispose of his troops properly until engagement was imminent in the fading daylight. Charles Stuart was in all likelihood drunk, and forgot to appoint a commander to his left wing; but Hawley proved the more incompetent, sending his dragoons to charge uphill and across boggy ground into driving rain. When they eventually closed to within 10 yards of the Highland infantry a devastating musket volley slaughtered perhaps 80 of them; the rest either fled or were overcome by the canny Highlanders who stabbed and slashed their horses. Fleeing dragoons trampled their own infantry who shot at them in return. A few Hanoverian units stood firm briefly in the darkness, but most fled in panic towards Linlithgow as claymore-wielding Highlanders charged. Such was the confusion that many Jacobites ran away too, and only next morning was their victory apparent.
Hawley hanged many deserters, shifting the blame. Charles Stuart dawdled and lost the initiative. Matters were resolved at Culloden three months later.