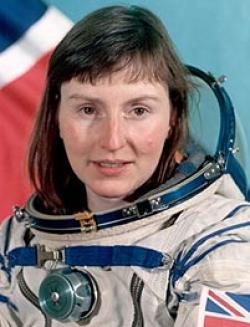 Astronaut wanted: no experience necessary. Helen Sharman , a research chemist working at the time for Mars  according to her because she loved chocolate  heard the advert on her car radio, and decided to apply. So did more than 13,000 others. But she fitted the bill better than all the rest: she had a doctorate in chemistry; was physically fit; had an aptitude for engineering concepts; and showed a capacity for rapid language acquisition  whoever went on the spaceflight would need to speak fluent Russian.
Thus on May 18 1991, with her parents and sister nervously watching from a distance, Sheffield -born Helen Sharman blasted into space from the cosmodrome in Kazakhstan aboard the Soyuz TM-12 mission. She had trained for 18 months in Star City near Moscow, but in the end it was almost in vain, as not enough European backers could be found to pay what the then Soviet Union required  the programme of experiments was indeed limited by the lack of funds.
Eight days later she returned safely to earth, having completed some work observing the growth of pansies under weightless conditions, but far more significantly having become the first Briton in space, and at under 28 years of age one of the youngest ever astronauts.