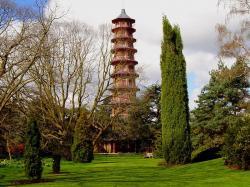 Though the gardens at Kew have a history pre-dating their royal botanic garden status by many years, the nature of the place changed in 1759 when Princess Augusta, widow of Frederick Prince of Wales, appointed William Aiton as in effect the first curator of the botanic garden.
The precise date of Aitons appointment is not known, thus the May 19 issue of a special 50p coin and four stamps is somewhat arbitrary, indeed Kew is celebrating the 250th anniversary throughout 2009. But such a magnificent establishment deserves a particular day on which the focus of the country can be directed at its achievements.
Aiton was a Scot, born near Hamilton . A gifted and professionally trained gardener who had been deputy at the Chelsea Physic Garden , he was a natural choice for the work of looking after the 10 acres of medicinal plants. From his work we can trace the development of the Royal Botanical Gardens at Kew  he compiled a catalogue of the species planted there and published it in 1789, and the methodical collection and care of plants at Kew which underpins its World Heritage Site status (also of course recognising its magnificent buildings) really begins with Aiton.