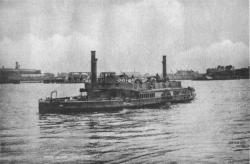 Sir Joseph Bazalgette, chief engineer to the Metropolitan Board of Works, gave us the London sewage system and in 1889 the free ferry at Woolwich . His great-great-grandson Peter masterminded Changing Rooms and the UK version of Big Brother, surely a snapshot of the difference a century makes to a nations soul.
Woolwich is a town divided by the River Thames , once a fishing village indeed, and since at least medieval times there was been a ferry of some sort operating between the two sections  one William de Wicton is known to have run it in the very early years of the fourteenth century, selling out for the princely sum of £10 in 1308. In the first half of the nineteenth century a commercial ferry operated in Woolwich between 1811 and 1844, but the company failed and the service ended.
In 1880 local pressure began for a renewal of such a service provided by the town authorities, but costs were prohibitive, and eventually the Metropolitan Board of Works was brought in to manage the embryonic project, in 1844 agreeing that the service should be free in line with the move elsewhere in London to purchase toll bridges and end payment to use them in order to improve communications and trade in the city.
The opening of the free ferry on March 23 1889 was preceded by great celebration and pomp, future Prime Minister Lord Rosebery, the first chairman of the London County Council which had succeeded the Metropolitan Board of Works only days before, attending the ceremony. Over the first weekend of operation the single paddle-steamer available, the Gordon (named for Empire hero General Gordon ) carried some 25,000 people travelling at a stately eight knots. Most of the first passengers were simply enjoying a free ride across the Thames for the experience, but soon the service (with three ferries operating) became vital for trade and members of the general public going about their work lives.
Sadly for history if not logistics it seems inevitable that a bridge upstream of the ferry will be built, making crossing faster for the cars and lorries that use the service, with doubtless the demise of the ferry following the opening of that bridge.