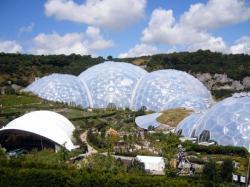 Though hopes for the success of the Eden Project were high from the outset, the idea seeming to hit the right note for its times, the organisers were still surprised that from day one, Saturday March 17 2001, it was a hit. Indeed, people had queued since well before dawn to be among the first paying visitors to the fully opened site.
The Eden Project, making good use of an exhausted clay pit a couple of miles from St Austell in Cornwall, contains the worlds largest greenhouse (almost four acres in area, and at its highest point well able to fit in Nelsons Column), a massive dome housing a recreation of the rainforest, complete with some of the creatures of that environment as well as the plants. Various other domes house different ecologies, and external gardens beautify the site too.
Only 7,000 people were able to attend the official opening, but later in the day many thousands more visited the site. At the time foot and mouth disease was hitting the farming economy, and a score or more of local farmers protested peacefully on the day, worried by the risk of the disease being carried by visitors.
The Eden Project , thought up by Tim Smit, with architecture by Nicholas Grimshaw, was expected to attract 750,000 visitors every year, but it is running well above that, with around a million people going there annually.
Inevitably there has been some criticism of the site, largely based on its success, though recently the cost to the public purse has been targeted. But when you look at the educational impact, the scientific and conservation work done there, and the support for the economy of the South West, it seems money well spent. And though comparisons are invidious, it is worth putting the £86 million building cost for Eden against the £789 million spent to erect the Millennium Dome.