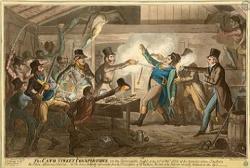 Britain in the second decade of the 19th century was an increasingly divided society. The Corn Laws were passed in 1815, to the benefit of the great landowners and the detriment of the poor, forced to pay artificially high prices for bread. In August 1819 the Peterloo massacre demonstrated the growing popular support for radical reform. And shortly after Peterloo the ruling elite passed the Six Acts, limiting the right of public assembly, increasing stamp duty on newspapers and leaflets, and strengthening the laws against seditious libel.
Philosophical support for this discontent, and indeed a solution to it  namely sharing all the agricultural land in Britain between its people  was provided by Thomas Spence, who was regularly imprisoned for promoting his views. Spence died in 1814, but his supporters continued to meet, increasingly convinced of the inevitability of a violent revolution.
The most prominent voice after Spences death was Arthur Thistlewood, who was eventually tricked by agent provocateur George Edwards into planning an attack on many cabinet members at a dinner to be held in the Grosvenor Square home of Lord Harrowby, Lord President of the Council  in fact Harrowby was out of London, and the whole thing including the newspaper item announcing the dinner was put up by Home Office officials.
The whole affair was hastily pushed forward, in spite of one Spencean supporter, William Davidson, finding out that no dinner was to happen  Thistlewood simply ignored the information. A building in Cato Street, near Grosvenor Square, was rented as a base for the expected large numbers of radicals who would join the attack (though only 27 materialised in the end).
The group, armed with pistols and swords ready to rush the mythical dinner, gathered from early on February 23, and met upstairs in the hayloft in the early evening. At 7.30pm the Bow Street Runners, tired of waiting for the Coldstream Guard unit which was supposed to back them up, rushed the building, overpowered the downstairs guard, and climbed to the upper floor. Here Thistlewood killed one of the policemen, Richard Smithers, before escaping through a rear window along with several of his comrades. They were all arrested, as were those who remained in the Cato Street stable.
Previous problems with using agents provocateurs meant Edwards was not used as a witness in the hasty trial of the leaders; but two of their number were persuaded to turn Kings evidence, and on Mayday 1820, two days after being convicted, Thistlewood, Davidson, James Ings (a former butcher who had promised to behead any cabinet ministers taken alive at the putative dinner), Richard Tidd, and John Brunt were all hanged  originally they had been sentenced to be hanged drawn and quartered. Several of their colleagues were transported for life.