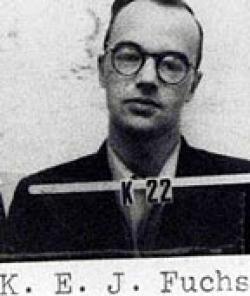 The importance of the German-born British physicist Klaus Fuchs in helping the Soviet Union develop a nuclear weapon is still unclear. Beria, who oversaw the project in Russia, used his information for his own purposes, rather than as support for the scientists involved. And the work that Fuchs had been involved in, while undoubtedly brilliant and not far from the golden key to the bomb, was not quite there.
Sometimes it can be difficult to reconcile the bravery and skill of British intelligence operatives in WWII with the idiocy of those above them. Klaus Fuchs fled from Nazi Germany in 1933 because of his communist politics - had he not done so he would in all likelihood have died there. But because of his intellectual brilliance he was recruited during WWII, after a brief spell of internment in the Isle of Man and in Quebec, to assist in the British work on developing a nuclear bomb. In spite of his known sympathies he was not monitored closely enough to prevent him contacting the Soviet Embassy via a German communist friend.
Fuchs offered his services to the Soviets out of a belief that they had the right to share the knowledge being explored. When the Manhattan Project was underway he was transferred to Los Alamos, where it was difficult to move without falling over scientists passing secrets to the Russians. Donald Maclean, later found to be another spy, was providing similar information from a separate source at the same period.
His downfall came because of the defection of KGB agent Igor Gouzenko, and the cracking of a Russian code. Even then he may have escaped punishment, but confessed during lengthy interrogation after his arrest on February 3 1950. His trial, hastily pushed through to take place on March 1 1950, lasted less than an hour and a half, and the day after it he was sentenced to 14 years for espionage. He served nine, in stark contrast to the treatment of Ethel and Julius Rosenberg in the USA, executed for their conspiracy. Fuchs returned to Germany, or at least communist East Germany, where he worked in the Central Institute for Nuclear Research. He died in January 1988.