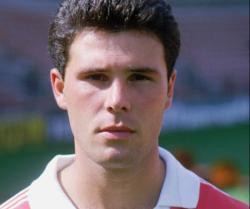 On the face of it a court decision in Luxembourg concerning a Belgian footballer wishing to transfer to a French club seems to have little to do with British history or life. But the so-called Bosman Ruling changed the face of British football .
Belgian midfielder Jean-Marc Bosman, after five years of litigation, obtained a ruling from the European Court of Justice that allowed players at the end of their contracts to move where they pleased; additionally the case meant that quotas restricting the number of players of EU nationalities in any teams were declared illegal.
The positive for fans was that suddenly Manchester United and the like could field all their star EU players in European competitions, where previously a quota meant that only three foreign players and two assimilated foreign players (with residential qualifications) could appear in squads for European games. As foreign for English clubs included Welsh, Northern Irish and Scottish players, some of the squads in the Champions League pre-Bosman were very different from what fans saw in league games.
For most clubs the negative was that justifiably the best players could negotiate longer contracts to delay them doing a Bosman, but this meant only the richest clubs could afford them. Smaller clubs who relied on developing players and selling them onwards were deprived of much of that income  they couldnt afford risky long contracts. The richest clubs - Manchester United, Chelsea , Liverpool and Arsenal - have dominated the Premier League. Between 1999 and 2009 only those four and one other featured in the top three Premier League year-end places. The fifth member of that exclusive club is Leeds , which disastrously spent money it had not got - the club subsequently dropping to the third tier. In the same period the FA Cup had five winners: the Big Four, and Portsmouth . The quality of play at the top has arguably improved, but the romance has gone.