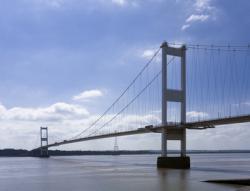 Suggestions about building a road bridge over the Severn Estuary at roughly the same point as the 1966 bridge were made as far back as 1824 by Thomas Telford , but the Severn rail tunnel and another rail bridge received the stamp of approval, understandably given the relative significance of rail and road traffic once the age of steam had begun.
After WWII , when the plans for a trunk road system put into place at the end of the war were set in motion, the idea was given fresh impetus, though financial constraints meant that the Forth Bridge was tackled first.
Work on the Severn Bridge, sited where the Aust Ferry a little to the north of Bristol took passengers the mile or so over the river, began in 1961, and by 1963 the substructure was ready. A further three years of work were needed to complete the superstructure, a conventional suspension bridge at the main span, though what is referred to as the Severn Bridge in fact spans the River Wye as well, and is made up of two bridges and two viaducts. The Queen opened the crossing officially on September 8 1966.
The total cost was a mere £8 million, and with traffic far heavier than expected (as ever) the tolls were very lucrative. These tolls, levied only on westbound traffic (i.e. into Wales) on the M48 have caused many to complain over the years, some referring to the decision (rather illogically) as a tax on Wales.
Increasing traffic loads led to another bridge being constructed nearby, completed in 1996, and also meant that the 1966 bridge had to be resurfaced and strengthened in the 1980s.