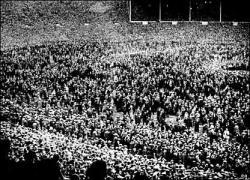 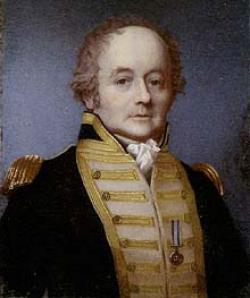 Mutiny on the Bounty

In a stark contrast to what happened with the current stadium, the original Wembley was completed a year ahead of schedule, so the FA Cup Final was able to be switched there in 1923 after a run of several years at Stamford Bridge . It was to prove memorable not just as the first FA Cup final played at the venue, but as a disaster only just avoided.
The FA had gone to town on pre-match publicity, fearing that the 125,000 capacity would not be filled on the big day. But good weather, the prospect of obtaining tickets at the gate, and the fact that London side West Ham was one of the finalists, drew unprecedented numbers, though the other team, Bolton , was only expected to bring about 5,000 fans from Lancashire . The turnstiles opened at 11.30, with the good natured early-birds entering the stadium without difficulty. But as the planned kick-off time neared things went wrong. People without tickets rushed the by now closed turnstiles, brushed the inadequate police presence aside, and swarmed into the ground. Few of the later arrivals tried to go into the upper tiers, and so sheer weight of numbers forced those on the lower level forward inexorably.
In the end it is estimated that at least 150,000 got in, with more sources saying that close to 300,000 squeezed their way into the new stadium. Stewarding was totally ineffectual. The police, until reinforcements arrived from all corners of the city, were overwhelmed.
Happily the mood was calm and cheerful, and when George V arrived the spectators sang God Save the King with gusto.
But it looked as if the match might be cancelled, as spectators had spilled onto the pitch, and indeed the start was delayed by 45 minutes. The saviours of the day were the police horse Billie and his rider Constable George Storey. On the newsreel footage of the events the horse, actually a grey, appeared white, thus the final has gone into history as the White Horse Final.
Billie (along with several other police horses) managed to move the crowds back until the touchlines were visible again, the whole operation being done with good humour, and so the game could begin with spectators inches behind the white lines.
Eleven minutes into the game there was another crowd surge, again encroaching on the pitch, so the referee was forced to halt play until the crowd could once more be forced back - though this time there were some injuries, and 22 fans were sent to hospital.
The game itself, which finished 2-0 to Bolton, had one particularly controversial moment, Bolton's second goal, with West Ham players claiming the shot by Jack Smith came back off the post, not as the referee thought off a spectator jammed against the net, and the Hammers further claimed the ball had been kicked by a Bolton fan on the touchline to one of his team.
Near the end of the game the West Ham Captain George Kay somewhat unsportingly tried to get the game abandoned, and after it, rather against the mood of the day, their trainer Charlie Paynter blamed the white horse for ruining the ground near the touchlines where the star wingers for the London side played!
If such events happened today there would be a massive national outcry, and the press was indeed scathing, though the obvious heroic angle offered by the white horse mitigated the criticism. The rules and safety regulations were changed well before the following year's final, one obvious amendment being no ticket sales on the day.
Billie and PC Storey went into history. With a little less fortune the day might instead have been remembered as another one of the great football ground tragedies.