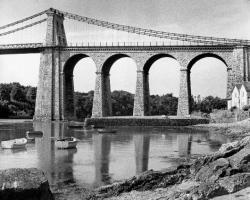 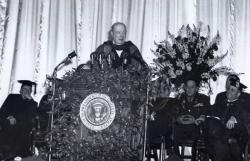 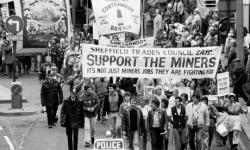 The first bridge to span the Menai Straits was opened in 1826, a road bridge that helped open Anglesey to greater trade and indeed tourism, increasing the value of the port of Holyhead . Such was the growth in traffic that within a decade discussions were already taking place regarding the construction of a second bridge or adapting the existing bridge to carry rail traffic.
George Stephenson , who was one of the key figures in the rapid development of the rail system in Britain and not just for The Rocket, was consulted, and put his weight behind a new route, and when the plans were given the go-ahead in 1845 it was his son Robert who was emmployed as chief engineer to oversee the work.
The bridge design chosen was a box-girder and suspension type, in essence belt and braces as many engineers thought the box girder construction alone would not be suitable for such a lengthy span  the end bridge was 461m. Two very senior consulting engineers were used to review the project: one, Eaton Hodgkinson, said the chains to create a suspension element were required; the other, William Fairburn, was convinced they were not, and persuaded Robert Stephenson to follow his line  with the help of a 70m trial span built in Fairburns Millwall works.
The Britannia Bridge (a suitably grandiose Victorian name, but also linked to the rock in the Menai Straits that provided the support for the central pillar) opened on March 5 1850, Robert Stephenson himself driving the first train to cross  even at this stage there were concerns about the stiffness of the box construction, concerns which proved ill-founded  no chains were ever fitted as back-up for the cellular box design.
If the desire to use a radical design was one example of Victorian confidence and style, then so in a different way was the inclusion of four giant stone lions guarding the bridge, two at either end.
For 120 years the bridge carried railway traffic to Anglesey, but in 1970 boys playing about on it dropped a lighted torch, which caused a fire that destroyed the original cast-iron girder design, and when it was reopened in 1972 the Britannia Bridge was of an archway construction, its two decks carrying rail below and road traffic above.