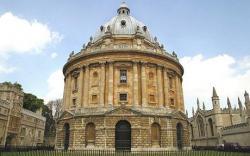 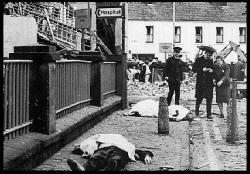 Strange to say, but at one point in the Tudor Age Oxford University (as opposed to individual colleges) had little in the way of library facilities. A small library of chained books dated from the 14th century, funded by Thomas de Cobham, Bishop of Worcester ; in 1488 Henry V 's brother Humfry Duke of Gloucester donated a notable collection of manuscripts; but the Puritan zeal of the then Dean of Christ Church, Richard Cox, saw much of the collection destroyed or dispersed for use as raw materials because the pieces had the taint of Catholicism.
At the end of the 16th century Sir Thomas Bodley , a diplomat and fellow of Merton who had married particularly wisely (to the exceedingly rich widow of a fish merchant) decided to dedicate himself to improving Oxford's facilities. He was the moving force behind improvement to various schools buildings, but most importantly he funded the refurbishment and re-filling of the denuded Duke Humfry's Library. Some 2,500 books were bought for or donated to the reinvigorated establishment, and Thomas James was appointed as librarian to care for them and facilitate their use by scholars (undergraduates and other unwashed being kept away from them by and large).
The revamped Bodleian Library opened on November 8 1602. Bodley's work did not stop there. He planned and raised funds for a significant extension of the library and of examination and lecture facilities, work on which began on the day of his funeral in 1613