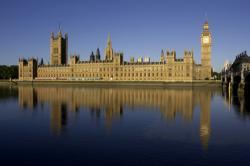 While the legislation to give Catholics political rights was passed in 1829, Jews in this country remained politically impotent until the middle years of the 19th century. Petitions demanding change by Liverpool electors and their City of London counterparts in 1830 and 1832 respectively were ignored, though attempts began to be made in the Commons to rectify the situation. In 1832, 1833, and 1834 bills were launched in the Commons but failed either there, or in the Lords. But in 1835 a principle was established with the passing of a law allowing Jews to take on the symbolically important role of Sheriff.
The same struggle continued into the 1840s, with the Lords the great barrier to change. The members of the Jewish community who were determined on breaking the last barrier to full political freedom, that is the right to take up a seat in the Commons, began to take another, more personal route. Lionel de Rothschild sought election as one of the City of Londons MPs in 1847, coming third in the ballot and thus earning one of the available seats, indeed coming close in his vote count to the Prime Minister, Russell, who attempted to put through the legislation which would have allowed Rothschild to take up his seat. By May 1848 the bill had gone through its third reading in the Commons, but was rejected by the Lords.
In 1850 Lionel de Rothschild sought election again, and again won the support of his potential constituents, but was again barred from entry. In 1851, however, David Salomons was elected for Greenwich , and tried a different tactic, entering the Commons quietly and even voting until he was noticed and eventually ejected, but not before he was able to speak on the matter to the Commons, voting again on the motion that he withdraw.
The pattern of Commons bills being voted down by the Lords continued through the 1850s, until a potential constitutional crisis loomed, and the Lords feared a clash with the repeatedly denied Commons. In spite of this a bill to have the oath requirements altered to enable Jews to take the loyal oath was amended by the Lords to negate its purpose.
At this point a very British compromise was found to get round the very British idiocy of the unelected Lords obstructing the will of the people. This was largely engineered by Benjamin Disraeli , Leader of the Commons, and himself of Jewish parentage, though able to sit in Parliament as his disputatious father had had Benjamin baptized when at odds with local Jewish figures. It was decided in July 1858 that each House could decide on the wording of the oath taken there. In the Commons the words relating to Christianity were made optional. Thus on July 26 1858 Lionel de Rothschild was able to take an oath in good faith, and finally sit in the Commons. It was not, however, until 1885 that the first Jewish peer was able to enter the Lords, and fittingly this was Nathaniel de Rothschild, son of Lionel.