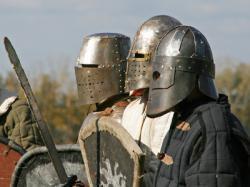 The Lancastrian adventure, started earlier in the year with the defection of the Duke of Somerset to Henry VI , had been dealt a huge blow with the easy Yorkist victory at Hedgeley Moor in April 1464. Somerset knew that if Edwards commander Montagu could bring peace to the North through negotiations with the Scots, he and Henry were lost. Somerset thus remained with the remnants of his forces in the North East, where towns such as Hexham and Langley in the Tyne Valley remained red rose strongholds, hoping to recruit more to his side.

Edward was gathering a massive army in Leicester , but Montagu either through daring or more likely in the knowledge that Somersets force was weak, marched in haste to confront the Lancastrians who were camped on the levels near the Devils Water, a river south of Hexham.

It is thought the Lancastrians were heavily outnumbered, Montagu mustering 5,000 men, Somerset between 500 and 2,500, already demoralised by defeat weeks earlier and including increasingly disaffected French and Scottish soldiers of fortune.

Montagu arrived with his army in the early morning of May 15th, catching Somerset unprepared. The Lancastrian camp was on low ground with the river behind them to the north restricting deployment and more importantly offering a barrier to escape. Montagu occupied high ground south of his enemy, but quickly charged, his forces concentrated in one major division in the centre.

The battle was short. Just as at Hedgeley Moor the wing commanded by Roos and Hungerford broke and ran before battle was joined, leaving Somersets centre outflanked and overwhelmed. The entire Lancastrian force fled in panic.

It is thought there were few battlefield deaths, but the Devils water claimed many victims, drowned trying to cross it or rushed beneath the feet of those who did make it to the other side only to struggle to scale its steep bank.

Edward was generally conciliatory and lenient after battles. Montagu after Hexham was not. Thirty senior Lancastrian commanders were executed in a brief period of retribution after the battle. Somerset was captured and put to death in Hexham on the very day of the encounter; others were given summary trials in York and then executed.

The Lancastrian head had been cut off, and its purse was too, Henrys war chest of £2,000 captured after the battle. Edward was to be little troubled until his avoidable quarrel with Warwick five years later fanned the embers of conflict into flames again.