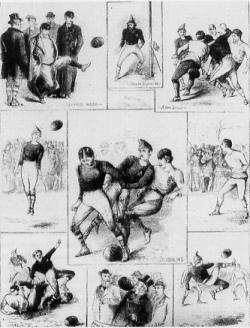 Edinburgh, Edinburgh and the Lothians The 27th of March 1871 AD

Back in 1871, when the ink dried on the first approved set of rules for the game of rugby, there were no cauliflower ears. At least, not yet. There was still a great deal of innocence in the game  which, arguably, would last until the game of rugby union went professional in 1995.
In the 19th Century, when the game was taking tentative steps to becoming a sport in its own right after sprouting awkwardly from football , there was an eccentricity to the game. The rucks, malls, scrummages, and barely concealed violence would come, but rugby was a bit of an odd-balls game using an odd ball. William Webb Ellis is credited with the big bang that created rugby. As legend has it, he picked up the ball and ran with it while playing school football. Seeing as no-one was quite sure of what footballs rules were (no change there) chaos ensued.
It wasnt long before rugby had its own rules, attracting in number all those other lads who did not appreciate being chopped down by an opponents sliding tackle, and felt that running with the ball should have been part of football all along. The history books, sadly, do not state if these pioneering gents were big brutes with hams like Californian redwoods, and necks thicker than an elephants thigh. It wouldnt be long before the Jack Sprat build of the football player would be snapped on the rugby field like a desiccated twig.
With a fledging Rugby Football Union in place  many of its committee members were still players of the sport  what rugby needed to cement its place in the international arena as a sport was competition. Perhaps lacking the visceral delivery of a bloodied Mohammed Ali, beaded with sweat and yelling into the camera, Im gonna git ya, etc, Scotland and Englands enthusiastic rivalry with the oval ball began with a challenge. The challenge from the Scots was in response to a letter submitted to The Times on the 4th December 1870 by Benjamin Burns of Blackheath and Edwin Ash of Richmond , in which the representatives of Englands two most prominent clubs mourned the lack of cohesion in the game, and an unwillingness of the Scots to take part in the formulation of some hard and fast rules.
The Scots replied via a letter to Bells Sporting Life. Signed by five club captains its premise was simple: in a 20-a-side game of rugby, the Scots would give 20 of Englands finest players a hearty welcome and a first-rate match. The English accepted the challenge  which, if anything, was more of a cordial invitation, one that echoes the duality of the rugby idiom; a game for hooligans played by gentlemen.
The hooliganism would take place on the 27th March 1871. Blackheaths Frederick Stokes led the 20-strong English team out at Raeburn Place, while Francis Moncrieff led the Scots. It would not be long before tempers would be frayed, symptomatic more of the games primitive rule structure rather than owing to cross-border hostilities. The Scots wore dark blue jerseys and white cricket trousers; the English were all in white, with the red rose on the breast. Umpire Hely Hutchinson Almond, a headmaster at Loretto College (one of Scotlands preeminent rugby playing schools), was in the right profession; discipline was rationed. The new rules that outlawed hacking were forgotten in the heat of battle. The game, of two 50-minute halves, was won by the Scots. But not without some complaint by the visitors. By the rules of the time, unconverted tries did not count  the Scots ran in two, the English one; but no-one converted anything.
Almonds decision was final. A seasoned campaigner in the corridors and classrooms of Loretto, he sided with the Scots, not so much out of national fervour, but by virtue of their tendency to only volunteer their captain to challenge the umpires decision. Such an approach would carry favour with any disciplinarian. England were, however, gracious in defeat, and praised the Scots energy. Despite the number of dissenting voices who thought rugby to be a barbaric sport with too many violent excesses, outraged people whose letters filled The Times with warnings of injury and player imperilment; up to 4,000 spectators watched the game. Rugby was growing.