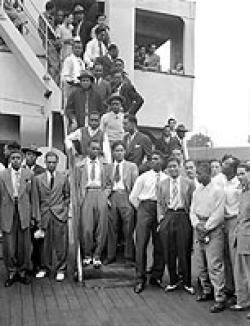 When WWII came to an end Britain was left with a labour shortage  many had of course died in the conflict, and reconstruction meant that there were more jobs available than people to fill them, an attractive situation for British passport holders in the colonies, for whom at that time an open door policy existed.
An advertisement offering cheap passage to England appeared in the Jamaican paper The Daily Gleaner. With the cheapest fares only £28 10s it was a real opportunity. In spite of worries about the cold wet climate and whether they would be met with open arms or violence, almost 500, mainly Jamaicans and Trinidadians, took ship on the SS Empire Windrush.
Some were drawn by the chance of enlisting again in the forces, particularly the RAF; others by the promise of jobs just waiting to be filled.
It seems fitting that the Empire Windrush had been seized from the Germans at the end of the war, and had briefly seen service as a British troopship just as it had carried Nazi troops during the war. It was a symbol of the end of the war and beginning of a new world, of the switch back from a war economy to the rebuilding of a nation.
In spite of the urgent need for labour, and the legal right of those coming to enter Britain, questions were asked in Parliament, and some resentment stirred up against the prospective immigrants  though many only planned a stay of a year or so. This reaction was particularly noxious given that the majority of men on the ship had been in the British forces during the war.
Many Windrush passengers found work in the NHS , established just days after the ship arrived. More worked on London Transport.
The arrival of the Windrush on June 22 1948 has come to symbolise a moment at which Britain began changing, began a move to a multi-racial society. Given our history this is a rather false picture: we have been a mix of peoples for millennia  the Picts and Celts from central Europe, Norsemen from Scandinavia, Angles and Saxons from Germany, and in later years waves of Jewish, Huguenot and other refugees, a diversity widened with the settling in Britain of Poles and Ukrainians displaced at the end of the war. What differed with the Windrush was that these were people of a different skin colour. In the sixty years since the ship docked most of us have become a bit more adult about this, but for some it is still for whatever strange reason hard to accept, which is very sad.

From Neil McCart on 21st September 2012
It should not be forgotten that most of these young men who came to Britain in the Empire Windrush had, not too long before, been serving in Britain's armed forces and had fought for this country during the Second World War. They had volunteered to fight and they had played a vital role in Britain's defence during the darkest days of the War.