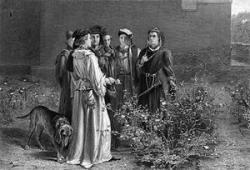 Battle of St Albans - Wars of the Roses starts

St Albans marked the end of the phoney war and the beginning of armed hostilities in the Wars of the Roses . What might have been a decisive victory for the Yorkist cause in fact sowed the seeds of yet more family and factional grudges that lasted decades.

Henry VI had been king since 1422, although had only achieved majority in 1437. He was prone to mental instability, a situation that added to the problems caused by those who had ruled in his name during his youth. English possessions in France had been lost by the fierce rivals the Dukes of York and Somerset . Henrys queen, Margaret, feared the growth of Yorks power, and sought to sideline him, creating a further rivalry at court.

York raised an army in 1452, only to reach agreement with Henry at Blackheath , an agreement immediately reneged on when Somerset was not tried for treason, and York was arrested and forced to swear he would not rise against Henry again.

The powerful Neville family sided with York after estates were taken from them and given to Somerset. In 1454 Margaret seized control of the government, a Frenchwoman ruling England when the two countries were still at daggers drawn. York was appointed Regent by the barons, Henry being mentally incapable at this time. Somerset was briefly imprisoned, Margaret banished to Windsor . When Henry recovered he reversed the situation, and the two sides prepared for open conflict.

After much manoeuvring the as yet small armies met at St Albans on May 22nd 1455. Henry asked for Yorks obedience. York demanded Somerset be handed to him.

After three hours of parlays York lost patience, and attacked the Lancastrian force barricaded within the town. They tried to storm the barriers on Sopwell Lane and Shropshire Lane, but were beaten back, their superior numbers (said to be 3,000 against the Lancastrian 2,000) counting for little in the confined space of the street battle.

The action was turned by the young Richard Neville, Earl of Warwick . He led a surprise attack by 600 men over the ill-defended ditch at the edge of the town, through gardens and back streets, until they came to the Market Place. The Lancastrian army was split asunder, and those at the barricades were attacked from the rear now. Many of the Kings leading nobles were caught in the Market Place, some as yet not armoured.

Warwick did not hold back when the King was surrounded, telling his men to fire their arrows at his party. Henry was wounded. Somerset was felled by an axe outside the Castle Inn, possibly executed rather than dying fighting. The battle turned to a rout, and the Lancastrians lost perhaps 300 men.

Henry was captured and taken by York to London , appointed again as Protector, but St Albans only allowed the country a brief period of peace before the rivals clashed again.