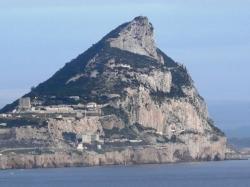 The tiny territory of Gibraltar has been a point of diplomatic and at times military conflict between Spain and Britain ever since it was captured by a combined British and Dutch force in the summer of 1704, during the War of Spanish Succession. At the time of its seizure, however, the peninsula with its poor anchorage was of little strategic importance, and was selected as a target by the admiral and general whose forces took it from Spain because it offered them a relatively easy victory after a series of bungled efforts elsewhere.
Spain had left Gibraltar with a weakened garrison, perhaps fewer than 60 professional soldiers backed by local militiamen who largely fled before battle commenced. There were it seems more cannon  though some in poor condition  than men to fire them. A British fleet of 22 ships led by Admiral Sir George Rooke bombarded the rock for several hours, after which a landing force of 1800 English and Dutch marines led by the Austrian Prince George of Hesse-Darmstadt was able to go ashore with ease. The explosion of a powder store at the main fortress killed more than 100 of the invaders, and a brief panic set in before reinforcements stabilised morale and the occupation was completed.
All but a few of the Spanish residents of Gibraltar chose to leave, although an offer guaranteeing property and religious rights was made (though this entailed accepting the Allied contender for the Spanish crown). Some Genoese residents chose to remain. In the autumn a lengthy siege of the territory began, ending in March 1705 with the garrison holding fast, the British claim to the 1300 foot high rock and the 2.6 square miles of land confirmed in the Treaty of Utrecht in 1713.