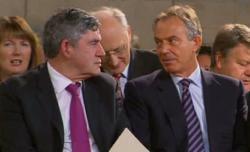 Beyond the fact that some sort of agreement was reached between the two leading lights of the post-John-Smith Labour Party, little is actually clear about what became known as The Granita Pact. That lack of clarity did not only affect political reporting on the situation, but the way Britain was governed by Tony Blair and Gordon Brown between May 1 1997 and May 6 2010, their personal relationship obviously at best strained from quite early in that period to Tony Blairs resignation in 2007.
The Granita Pact was supposedly a deal struck between the two men at the Islington restaurant Granita on May 31 1994, two-and-a-half weeks after the death of John Smith , Labours leader for the previous two years. In very broad terms it is thought Gordon Brown kept out of the Labour leadership race to allow Tony Blair a relatively clear run (his eventual opponents Margaret Beckett and John Prescott never threatening his expected victory). In return Brown was to control much of the Labour Partys domestic policy from his position as Shadow Chancellor and, after the expected Labour win at the next general election, as Chancellor. Additionally, Blair was to stand aside as Prime Minister at some unspecified time and back Brown to replace him.
Nothing it seems was written down, thus inevitably both men had different views of what had been hammered out. The very existence of a pact was long denied, but then so for several years was the clear mistrust and eventual loathing of each for the other. Even the location is questioned, Cherie Blair saying the talks took place at a friends home.
The nature of the alleged agreement adds to our understanding of Tony Blairs focus on foreign matters, not least his eagerness to join the attacks on Iraq and Afghanistan . The nature of the men as consequently demonstrated adds to the tragedy of John Smiths untimely death.