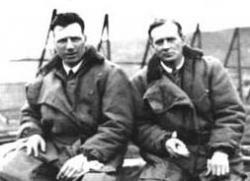 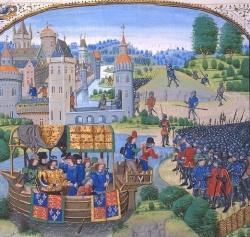 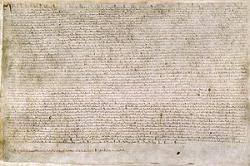 When World War I ended the race to claim the largest of the Daily Mail Aviation Prizes, £10,000 for a non-stop flight across the Atlantic, began in earnest. Lord Northcliffe had put up the prize as part of a list of challenges to aviators at the dawn of the flying age. Others had already been taken, Bleriot pocketing £1,000 for his cross channel flight.

Alcock and Brown working with Vickers were not the only ones in the field; indeed they faced well organised and better funded competition from Admiral Mark Kerr and the Handley Page aircraft manufacturing company. Kerr had the Handley Page Berlin Bomber, a four-engined giant of a machine, and he had a significant lead in terms of preparation. But he also had a very painstaking mentality, wanting every detail to be perfect before attempting the crossing. Kerrs plane was waiting for yet another test when Alcock and Brown set off.

The two British flyers  Captain John Alcock of the Royal Air Force, and Lt. Arthur Whitten-Brown of the Royal Flying Service  had a more daring attitude. Alcock in reality had little flying experience, having been shot down and captured early in his combat career. Brown had been an observer not a navigator, and only learned the skills of aerial navigation when a prisoner of war.

They had to fight to get fuel, Handley Page having secured all the aviation fuel in St Johns Newfoundland. They had also spotted the problem that plagued earlier flights, and was making the Handley Page aircraft run poorly  the local water was very impure, and unfiltered it blocked pipes and radiators. Alcock had the water for his machine filtered and boiled.

The twin-engined Vickers Vimy flown by Alcock was adapted by the company to hold extra fuel where it would have held bombs. It was shipped over to Newfoundland in pieces, put together with the help of a local engineer, and given the minimum of testing. When a halfway decent weather forecast arrived they set out.

From the outset the flight was full of dangers, only just clearing the trees at the end of the runway at Lesters field because of the weight of the additional fuel on board. The Vimy took off at 1.45pm local time on June 14 1919.

The flight was to prove an epic. One of the engines gave problems from early on, part of the exhaust melting, flames spewing out at regular intervals. The batteries of the heated flying suits gave out in the first few hours too, so the two men were desperately cold. The good weather forecast was horribly wrong. Fog blanketed them, meaning they navigated by luck and feel for several hours. Huge cloud banks swallowed the plane, turbulence twice throwing the plane into a spin that Alcock only managed to recover feet from the waves  once they were so close they tasted the salty foam.

It was June, but they hit a dreadful snowstorm, the open cockpit filling with snow, and the wings icing up to the point that Brown had to get out of the cockpit and chip away at the ice, also clearing the air inlets of the snow blocking them. He had to do this six times during the course of the flight, holding on with one hand, and hampered by a stiff leg, the legacy of a war wound.

In the wonderful amateur spirit of the age the pair had taken sandwiches to sustain them, plus of course some beer and whisky. They were so hungry they fantasized as they flew about the duck and green peas they would feast on when they arrived.

Eventually they spotted the coast of Ireland, and even then disaster nearly struck, as they put down in what looked like a green meadow near the town of Clifden, but was in fact a dangerous bog. The Vimy tipped its nose into the soft surface, but neither of the adventurers was hurt. The flight had taken 16 hours 27 minutes to cover 1890 nautical miles. On June 15 1919 the Atlantic had been crossed non-stop by air for the fist time.

Alcock and Brown were rushed to London , the 197 letters they were carrying hastily franked and forwarded. The feast they were given at the London Aero-club was worth the wait: Oeufs Pochés Alcock, Supreme de Sole à la Brown, Poulet de Printemps à la Vickers Vimy, Salade Clifden, Surprise Britannia, and Gateau Grand Succès.

A few days later the young men were knighted by King George , national heroes who truly merited the award. And they proved their decency too by insisting their mechanics have £2,000 of the prize.

Tragically Alcock was killed in December the same year while ferrying a plane to the Paris air show. And strangely, although given the experience of his great adventure perhaps not so strangely, Brown never flew again in his life.

From Brendan Lynch on 12th January 2010
A professional to the last, Flight magazine concluded that Alcock had tried to save the Vickers amphibian when confronted by a wire fence, but that the plane had stalled.

From brendan lynch on 21st May 2009
Thank you for your informative website about two of my aviation heroes, Alcock and Brown! Please note that my new book dispels many of the repeated myths about the flight - Brown's wing-walking, clearing intakes etc. Book is; - YESTERDAY WE WERE IN AMERICA. Alcock and Brown. First to Fly the Atlantic Non-Stop. Foreword Len Deighton. Haynes Publishing. ......Staff from the Marconi radio station on Derrygimla bog, Galway were first to greet the Atlantic conquerors. They refused to believe that the fliers had crossed the ocean.  We are Alcock and Brown. Yesterday we were in America, the pilot reiterated. John Alcock was the first person to make that statement in Europe. But Alcock and Brown were almost beaten to the prize by 30-year old Harry Hawker. The Australian was one of Britains best-loved fliers and record-breakers. He set off before the Vimy fliers in his Sopwith Atlantic, but a radiator problem forced him to ditch 800 miles from Ireland. He was very fortunate to be rescued by the Danish tramp steamer Mary. The ship had no radio and Hawker was presumed dead until the ship arrived in Scotland and announced his rescue. British cinema shows and a Royal Albert Hall concert were interrupted to relay the rescue news and Hawker was mobbed by thousands when he returned to London. Hawker ditched 90 yrs ago today, May 19, 1919! best wishes, Brendan Lynch PS Signed copies new book available for £25 incl post. My new weebsite is: brendanlynchbooks.wordpress.com - brendanlynch@iol.ie