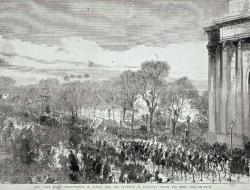 It is sad that the right to vote, so hard won in this country for the majority of the population rather than the propertied classes who once exercised exclusive control over our politics, should be so little prized by many.
The 19th century saw continual struggle towards the goal of fair representation, notably in the (partial) victory of the Great Reform Act of 1832, which at least reformed constituencies and somewhat extended suffrage. The next milestone of universal manhood suffrage was thwarted in Parliament until and even in the 1860s, Gladstone s 1866 Reform Bill defeated and his government brought down accordingly.
It was in the aftermath of Gladstones defeat that the Reform League, on the radical wing of its movement, first organised a demonstration in Trafalgar Square in June 1866, then called for a great gathering at Hyde Park to take place on July 23 1866. Blocked at Marble Arch by 16000 policemen, with omnibuses and the carriages of the wealthy deployed as barricades, the demonstrators had to resort to demolishing the railings to enter, fighting police in the process and even stoning the police commissioner. When the Blues Horse Guards arrived in support thankfully  and possibly with the whiff of mutiny in the air  they held back.
It is thought 200,000 demonstrators gathered in the park, their numbers swelled by sympathetic passers-by. In the end the gathering petered out, though the earlier violence left one policeman dead. The point had been made, and the following year a new Reform Act was passed.