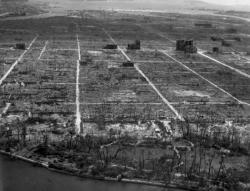 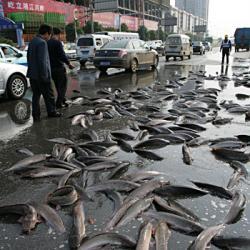 Just weeks after the first atomic bomb was tested in New Mexico the United States deployed a second in action against Japan: President Truman hoped it would secure a rapid end to the war.
A bomb using fission of Uranium 235 to generate explosive power was dropped from a B-29 bomber, memorably named Enola Gay after pilot Colonel Paul Tibbets mother. The plane and the two which accompanied it were detected by Japanese radar, but not intercepted as apparently offering no serious threat. The bomb, Little Boy, was released at 08:15 local time at a height of 31,000 feet, detonating at 1900 feet. In seconds approximately 75,000 people were dead, most burned by the blast; radiation killed perhaps that many again within five years.
The morality of using the bomb, and in particular of deploying a second three days later at Nagasaki, has been much debated. Japans leaders had indeed made very tentative approaches to the USSR (at the time an intermediary, as until August 9 Stalins forces were not at war with Hirohitos) about peace, but the Potsdam Declaration of July 26 1945 demanding surrender had been very pointedly ignored; all the signs were that the country was preparing to continue the conflict. Even after Hiroshima the Japanese were discussing the conditions they would put on any surrender, one of which was that Tokyo would deal with any alleged Japanese war criminals.
What seems most inhuman is the way that Hiroshima and Nagasaki after it were used as experiments: Hiroshima, though a significant material source and army headquarters for Southern Japan, had not been the target of conventional bombs so that the nature of a nuclear explosion hitting a city could be studied. Robert Oppenheimer had led the target selection process. And a different bomb to The Gadget tested on July 16 was used on Hiroshima. But one question is rarely asked: had Japan developed the bomb, would the people who slaughtered up to 30 million men, women and children throughout Asia have stopped after detonating two?
Japan eventually surrendered on August 15 .