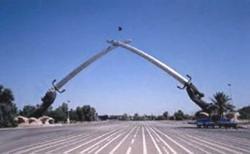 The precise date when Baghdad can be considered to have fallen is open to debate, but the end of Saddam Husseins power in the city was surely marked by the famous moment when his giant statue was toppled on April 9 2003.
American forces had already on April 4 taken the citys airport; the following day US armour drove with near impunity through various districts of the Iraqi capital, repeating the exercise on April 7 though encountering some opposition. That same day Saddams main palace near Tikrit was taken by the Coalition, and calls made for remaining Iraqi units loyal to Saddam to surrender. Saddams Minister of Information, derided as Comical Ali for his ridiculous pronouncements during the conflict, made a speech to camera on April 7 claiming Coalition troops were committing mass suicide and there were no US tanks in Baghdad  as several of them manoeuvred in the background.
The formal occupation of Baghdad began on April 9 2003, the same day Saddam made his last defiant walkabout, but also the day his 6m statue in Firdus Square was pulled over before massed TV crews and press photographers.
George Bush made a victory speech on May 1, showing his usual fine grasp of events: the military conflict was indeed over; but resistance had begun. The country descended into chaos as the Baath regime was swept aside with nothing credible to replace it.
Saddam was captured on December 13 2003, tried for crimes against humanity, and hanged on December 30 2006.