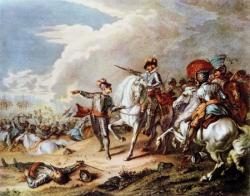 Of all the battles that have taken place on English soil only Hastings could perhaps claim to be more significant than Naseby. Hastings saw a change of ruler and culture; Naseby meant that democracy rather than autocracy was Englands future, and because of his important role in the battle it was a significant factor in the eventual rise of Cromwell to Lord Protector.

In early May King Charles had led a major sortie out of his de facto capital Oxford, encountering various smaller Parliamentary forces in its progress through the Midlands, but looping back towards Oxford again in early June. Sir Thomas Fairfax, at the head of the New Model Army that was resplendent at least in part in its new red livery, had been given carte blanche in the campaign, and his decision was to engage the enemy before Charles could return to Oxford .

Thus by June 13 the Kings army was encamped near Market Harborough , and Fairfax was further to the south. Their advance guards and scouting parties  in the evocative terminology of the time called Forlorn Hopes  met that day at Naseby before disengaging as night fell. The following morning, at a very early hour, both armies struck camp in the hope of gaining an advantage with a dawn start.

Even if the Royalists could have secured the better ground, their chances in battle were not good, their force of less than 8,000 men being faced with around 13,000 in the New Model Army, including more than 6,000 cavalry, by now well-drilled and with experienced and determined officers. The Kings side had far fewer artillery pieces as well.

Fairfax occupied Mill Hill, high ground near the village of Naseby, his left flank partly protected by strong hedges, his right by a walled rabbit warren. This choice of ground perhaps reflected the continuing fear of Prince Rupert s cavalry that the Roundheads knew would come at them from one wing or the other. Fairfax sent Colonel Okey and a large party of dragoons  infantry mounted on light horses to transport them rapidly to points of strategic importance  a long way forward on his left. From behind thick hedges Okeys dragoons were able to fire on Ruperts cavalry on the royalist right as they charged towards Ireton and his mounted force on the Parliamentary left.

Rupert forced Ireton back, driving some of Iretons troopers from the battle, but Rupert and his cavalry had not learned from previous encounters. They continued their advance towards the strategically inconsequential Parliamentary baggage train in the rear. Ireton regrouped, and Ruperts advantage came to nought.

The two infantry forces closed, and with the superior numbers of the Roundheads they first held then pushed back their opponents. On the New Model Armys right Cromwell led his cavalry with great effectiveness against Langdales horse on the Royal left, pushing them back before turning in on the enemy infantry. Defeat for the Kings army was now inevitable, though the fight lasted some three hours. A small force led by Rupert fought a last ditch action, and rather than being routed the Royalists retreated in reasonable order. But they still lost over 1,000 dead, and had more than 5,000 men taken prisoner.

Naseby epitomises the difference between the cavalry forces of the Roundheads and the Cavaliers: Rupert dashing headlong and headstrong from the field to plunder the enemy baggage train when more intelligent action might have given his side victory; Cromwell and Ireton reacting coolly to setbacks and challenges as they came up, focussed on the task of winning the battle.

King Charles now had no army to speak of, and little or no immediate hope of creating another. Parliament had greater popular support, the Kings wealth had been radically reduced, and most tellingly of all the Parliamentary army was now better organised and better led. Charles had lost the First Civil War .