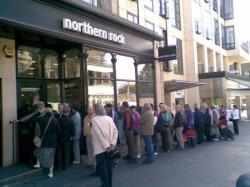 Until September 14 2007, in spite of growing murmurs about problems in the financial markets, most of us thought the wider economy was in reasonable shape. Then the bombshell hit. Late on September 13 news broke of Northern Rock requiring massive support from the Bank of England after attempts to arrange an urgent takeover had failed. The following day savers with Newcastle -based Northern Rock showed their confidence in the system, ignoring reassurance by heavyweights including new Chancellor Alistair Darling and Bank of England chief Mervyn King.
Lengthy queues formed at Northern Rock branches around the country: in Sheffield , Nottingham , Preston , Golders Green and Kingston in Surrey, people were determined to get their cash out of the ailing institution. The first run on a British bank since 1866.
The story of what happened at Northern Rock is illustrative of much of the financial crisis. It had grown rapidly, evolving from its firmly old-fashioned building society roots to become a bank dashing for growth. That growth was based on what turned out to be a risky business model relying on borrowing from other financial institutions to lend on mortgages, rather than the safer if duller route of using investor funds to lend out. Consequently vulnerable to rises in interest rates, when inter-bank lending dried up on Wall Street and in The City Northern Rock found it hard going. Some of the mortgages it was dealing in were at 100% of value; some offered at six-times earnings: hostages to financial fortune. Worse still, it got into the sub-prime mortgage market in the USA, lending to extremely poor credit risk borrowers.
The rest is history. Northern Rock was nationalised, but it was only one of many banks which had gambled and lost. We later discovered that nobody was to blame. All top bankers (bar a few eased out with pockets bulging) fully deserved their continuing obscene salaries; and Gordon Brown had saved the world, sorry British economy.