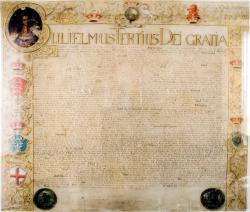 The Act of Settlement

The Act Of Settlement 1701 was the product of the anti-Catholic paranoia that had swept through Britains ruling elite ever since King Henry VIII denounced papal authority, laying the foundations for a reformed church.
The Act prevents Catholics  or indeed Muslims, Jews, Hindus  from the line of succession to the British throne. It guaranteed a Protestant line of succession, going so far as to exclude any potential monarch from the line of succession if he or she had married a Roman Catholic. In the early 18th Century, this measure did not seem too drastic. But the Act of Settlement is one statute that looks gruesomely anachronistic in the modern era  so much so that, in 2000, The Guardian launched a campaign to have it revoked, citing that it was at odds with the European Charter for Human Rights.
For those who drafted it, the Act brought a degree of security. With only Protestant descendants of Princess Sophia, granddaughter of James I , being eligible for the throne, it meant that the monarchal line of succession was closed to King James II and his ancestors. His exile was taken as his abdication at a time when the Glorious Revolution of 1688 brought King William III to the throne. The Bill of Rights of 1689 ensured that only heirs of William III, his wife Mary II , and her sister Princess Anne , could take the throne. The Act of Settlement goes further in its insurances against a Catholic monarch, explicitly excluding them from the line of succession.
It is one of the cornerstones of the British constitution, and there can be few countries in the world with a rigid constitution as Britains. The constitution may be uncodified, but the statutes that defined it have remained nigh-on unchanged since the 18th Century, and have always been a source of political hot-air. The Liberal Democrats have called for constitutional reform since their existence, while it was not until 1997 when Labour swept to power that the countrys constitution was significantly modernised with the abolishment of hereditary peerages, and the devolution vote for Scotland and Wales.
It was in this atmosphere of change that The Guardian, in alliance with the Scottish Parliament, Lord Hamilton and the Archbishop of York , David Hope, called for the statute to be scrapped. Anachronistic it may now seem, but it was a product of a time of great religious and political upheaval.