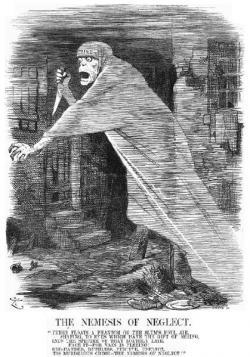 Given the state of forensic science at the time, and perhaps because the victims were members of the underclass Victorian London preferred to ignore, it is not surprising there is a lack of clarity about Jack the Rippers career  if there ever was one such figure. Other women have been suggested as possible earlier recipients of the killers attentions, but it is generally accepted that Mary Ann Nichols was the first to die at his hand.
Nichols was estranged from her husband, working as a prostitute in Whitechapel to earn enough to survive. In her early forties and no beauty, her health ravaged by the cheap drink that claimed most of her earnings, she was probably doomed to a less than dignified death, but her end in the early hours of August 31 as she worked the streets of Whitechapel was far worse.
A little before 4 a.m. Mary Anns body was discovered by a carter in what was then Bucks Row, now Durward Street. Her throat had been cut twice, and after death her abdomen had been carved into with several strokes both up and down and across, all the cuts according to the police surgeon made with the same knife, probably used by a left-handed assailant. The legend of the Ripper would soon spread across London as other victims fell to a brutal murderer who would never be identified, though a multitude of names plausible and otherwise have been suggested: Lewis Carroll , Walter Sickert , and Queen Victoria s grandson Prince Albert Victor just three of the better-known.